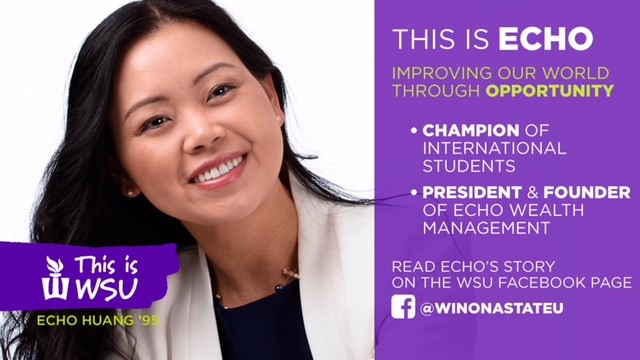 We are pleased to announce that Echo Huang, CFA, CFP®, CPA was interviewed by Maddie Swenson from Winona State University recently and is featured today in the “This is WSU” campaign:

Winona State University: A Community of Learners Improving Our World

Winona State University (WSU) is a public university located along the historical heart of Winona, Minnesota. WSU was founded as Winona Normal School in 1858 and is the oldest member of the Minnesota State Colleges and University System. It is notable as the first normal school to be established west of the Mississippi River.

The cross-cultural scholarship was one of the scholarships Echo received at WSU.  Because of this scholarship, Echo transferred from University of Idaho to WSU in 1993 without knowing anyone in the state. This scholarship offers International Students the ability to pay at the resident rate of tuition. Scholarship recipients share their culture with Americans as part of the requirement of the Cross-Cultural Outreach Program.

The cross-cultural scholarship is a substantial source of saving for International Students.